Well one week it was one side of my father’s family in the news and this week the other.  On Friday an article appeared in the Otago Daily Times regarding the restoration of the S F Aburn building in Princes Street.  I hadn’t ever noticed the building before the fire which almost consumed it but when in Dunedin in 2016 had taken a photo of it gutted, and could see from the article that not much had changed in three years. 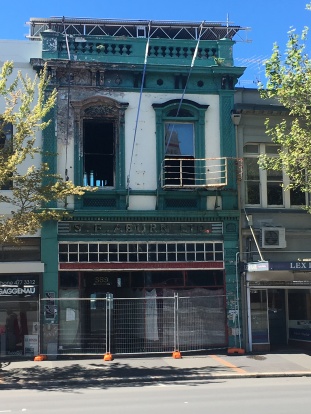 Samuel F(elix) Aburn trained as a painter and paper hanger and began in business in 1903.  The business later became involved in glass, and in this capacity it still operates today although the Aburn family is no longer involved in it.

The Hocken holds an archive for the business and also a wonderful photo of a group of young painters, including Samuel Felix, taken early in the 20th century.  I don’t have permission to reproduce the photo but this is a  link to a brochure produced by the Hocken on Dunedin businesses which has the photo on the first page.

It’s wonderful to see buildings such as this restored and even more exciting when there’s a personal connection.  Can’t wait to see what it looks like when I’m down in Dunedin later this year for the 1869 Conference.